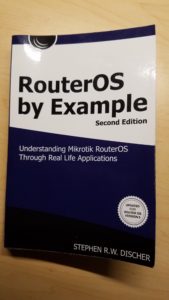 Before I give you the low down on how and why I think this book is the best thing to happen to RouterOS documentation since, well, ever – let me first dispense with a few disclaimers.

Yes there are YouTube videos, yes there are blogs and yes some are okay and yes most of them are not but nobody, I mean no-bo-dee, has put together anything close to this.  It will be the go to RouterOS reference book until ….. his next one.  (No pressure Steve!).  Cover to cover you are looking at 451 pages worth versus 321 pages for the previous book.  That said, Steve is the first person to say that it is not a reference book as it does not go into every feature description or nuance of the RouterOS platform. That’s true so maybe a better word for it would be “field manual” that guys in the field are going to reference a lot.

Who is this book for?

One of his stated purposes is to get the reader prepared to take the MTCNA and to this I would say that he not only over shot the mark (in a good way) but crossed into MTCRE and MTCTCE territory.  And by that I mean;

If you’re a novice, lucky you, you’ve come to the right place to get started.

If you are past that stage and are looking for more, welcome my brothers and sisters, your prayers have been answered.

If you are already an alpha nerd on this subject, buy the book anyway and learn what  a real usable book on RouterOS looks like and when you write your own  maybe –  just maybe – I’ll review it and let you know if it measures up.

Not stated but accomplished is that it gives written structure to the programming jungle otherwise known as RouterOS.

Like the title says, examples.  Lots and lots of examples (in color this time too!). The back cover says over 95 examples but to be honest, I didn’t count them so we’ll have to take his word for it.  Having read the first edition, seen the movie, watched the Broadway play and taken a few of his classes I was already familiar with his format and can appreciate his patience in getting a raw Mikrotik up and running with a firewall, routes DHCP and the like with pertinent explanations along the way.  He does not assume that you know too much about Mikrotiks but he does assume you know your IP from a hole in the ground.  There is no condescension (like I just did) and he also assumes that you want to learn this stuff and get better at it.

You will have a much better understanding of WiFi, DNS, DHCP, packet mangling, QoS, routing and trick techniques such as how to set up “splash pages” that those cheap motels use when you first log into their WiFi’s (not that I know personally of course, just what I’ve heard).

About the only thing I might have done differently is put the section on routing ahead of some of the other topics (namely wireless) but beyond that it’s hard to improve on this.

There is extra attention given to the tools available in RouterOS that are found in chapters 11 and 14.  You can’t say enough about the bang-for-your-buck you get with Mikrotiks when it comes to these sort of things and it was nice to see him expand on them.

Interestingly enough the chapter I enjoyed reading the most was on switching (Chapter 18).  This is a totally new section that was not covered in his first book.    It’s hard to find much on this topic as it pertains to Mikrotik outside of the wikis but I suppose that if you looked really really hard you might find something from six years ago written in Latvian (the official language of Latvia  btw).  FYI, this subject (vlans, port trunking, autonomous systems and so on) is not for a beginner, per se. However, as someone who has had to do this in the field with the paltry – and often times inaccurate or incomplete – documentation out there, it was a well-received recipe for not only “how to” but “why to”.  This is also the one chapter where he goes reasonably deep into switch theory – something you usually won’t see outside of a Cisco text book.  His unique down-to-earth, Texas A&M (that’s  Yankee for “Aggie” btw) style of ‘splainin’, things, has made one of the driest topics in the networking landscape an easy read.  I’m not going to say it was a joy to read unless you’re into it as much as I am, in which case, yes it was.

So what’s not in the book?

A list of every feature and function that RouterOS has to offer?  No, besides, you probably “can’t handle the features …” (said like Jack Nicholas in ‘A few Good Men’)

The Dude – Mentioned here and there but not covered.

Packet Analysis – Are you kidding?  No.

Scripting – Not directly but within some examples there were a few.  There was a really slick one – I thought – on page 402 but you’ll have to get the book to know what it is.

This book is for a lot of people in the RouterOS world.  If you plan on deploying, supporting or selling mikrotiks get it.  Now.  If you are a sponge for knowledge in this field you’ll be soaking this up for a while. As of this review, it’s not on Amazon yet but no doubt it will be.  If you get it from ISP Supplies, and if you ask him to sign it for you, he’ll know you read this review. 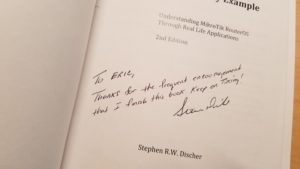