Cool things you can do with The Dude – Part 1

Cool things you can do with The Dude – Part 1

How to Navigate the Home Screen

I had the misfortune of getting into Mikrotiks just when the developer for the original Dude had left.  It seemed so intriguing, so visual, so potentially helpful. 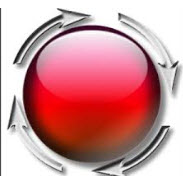 Nothing for how many years?  Three? Four?  It felt like a century.  I’ve refused to take girlfriends back for less time than that (HA!) but here we are.  Have I compromised my integrity?  Not at all – those girls  weren’t cheap while the Dude is free and therefore worthy of a second look.

The Dude is back in version 6.34rc and hopefully to stay this time.  Mikrotik sneaked in a teaser last December in one of their release notes [http://stevedischer.com/the-dude-is-not-dead/].  Truth be told it’s pretty cool too.  I’m using the 6.38 stable version and from time to time we’ll look at whatever changes/updates may come along.  In this installment we will go over how to setup The Dude on the Mikrotiks and your pc and explore the Home screen.  In the next installment we’ll go over how to set up your first network map.  If you are new to The Dude go in knowing that there is lots of eye candy, some useful, some not and some with uses in search of needs.  Also understand that most of the features work at the time I’m writing this blog – there are times when a feature works in one version only to be “broken” in the next and then fixed in a subsequent one.  Like the disclaimer says, “Past performance is no guarantee of future success.” And as a matter of ‘fair disclosure’ certain sections of what I go over in the setup phase is lifted straight out of the Mikrotik wiki – I’ve often said that some of my best work in school was plagiarized.

The Dude is a client/server method.  The server can be another Mikrotik router or an actual server with RouerOS and The Dude running on it.  The Mikrotik routers that can run it are shown below.  I haven’t put it on a server yet for two reasons; 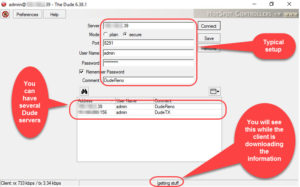 Server side – Hardware devices that The Dude will run on are as follows:

So step 1 is to decide on the router/device you want to use. For this article, I have The Dude running on an RB3011 (because it’s cheap!).  Step 2 – go to https://mikrotik.com/download and  download The Dude server pack for the appropriate device and then downlo 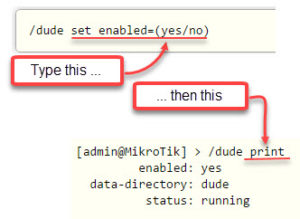 Next, upload The Dude server to your router and reboot just like you would any other firmware update.  Once the router is back up, go to the command line and type what I show to the right (this is where I plagiarize from the wiki btw).   You can also check the status of The

Dude in winbox by clicking on the Dude tab in the main menu. In the pre-6.36cr.12 version the default login was admin and no password.  After that, (i.e. 6.36rc13 and beyond), use the router’s login credentials.  The Dude data is stored on the system disk by default which is what we will stick with in this blog but later on we will talk about alternative methods.

At this point, you are done with the server side.

Install the client side to your PC just like any other software application – couldn’t be easier.  When you’re done, you will see The Dude in your program list as shown here. 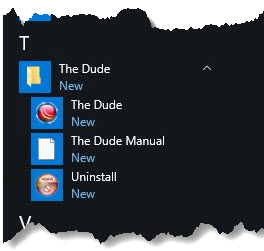 When you first launch The Dude enter in the information shown.  Also make sure that the version of the client is the same as the version of the server – you will sometimes get an error if they are not.  Notice that you can – and likely will – have more than one Dude server if you have to watch a lot of networks.  The reason for this pretty predictable;

Learning Panes – how to navigate around the Dude.

Once you’re logged in, the home screen looks like the screenshot below.   Mikrotik chose the term “pane” to describe the different sections or windows on the main screen.  On the left you will see the menu pane (at the top it actually says “Contents” but their wiki calls it the menu pane – must be a Latvian thing) which is basically a list of all the objects in The Dude that can be displayed in the main pane area.  On the right side is the Main pa 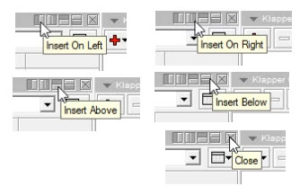 ne itself which can be subdivided into separate “main panes”.  In practice, you can create, for example, four separate panes and even subdivide each quarter into yet another pane by clicking the “pane buttons” on the upper right of the pane you are working on.  In my example below there are five main panes showing 3 separate network maps, the Devices pane and the Tools pane.  You can display just about anything you’ve built with the description in the upper left of each section.

On the very lower left is a pane that is not described anywhere (that I could find) so therefore I call it the “Show All” pane.  It only applies to network maps and the way it works is pretty simple.  It will display the entire graph of which ever network pane you are looking at and highlight with a black rectangle the area that you are zoomed in on.  As you zoom in or out the rectangle with grow or shrink accordingly.  If you click and drag within the Show All pane itself, you will move the rectangle and therefore move the zoom field in your Main pane. 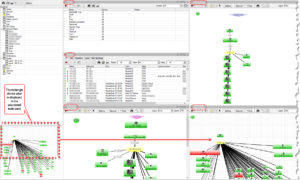 At this point in its development, The Dude is somewhat of a moving target in terms of what works as expected and what doesn’t.  For example, while writing this article, segmenting the panes was a “pain” as I had to restart the Dude client a few times to get the screen shown on the left to take.  I suspect this bug will be fixed in an upcoming stable release.   In terms of documentation, the wiki is helpful and by that I mean it’s better than nothing but frankly you can see still the edge of “nothing” from there. That said, I’ve had it implemented ever since it came back “online” and have found it to be a great tool to help diagnose several network issues and to just keep tabs on sites I’m responsible for.  Like many of you, I have tried SolarWinds, Spiceworks, PRTG and a few others  and they are okay but imho a little pricey in some cases and/or a little clumsy in others.  However, the Dude is free and is specific to the routers that I am a big proponent of and I know that it isn’t perfect – none of them are.  But I also know that, like everything else with Mikrotik, it is in a constant state of development.

Thanks for reading!  Next time, how to set up your first network map in The Dude